Team Concept Crew, Lexi Esterle and Drew Wiltberger of Ball State University Funez were named runners up in the competition and will be awarded $3,000 in scholarships each.

The Mia Guion Scholarship of $2,500 was awarded to Mia Iannucci of Temple University, who was selected via a criterion of “4 P’s” that were found demonstrated in the late Ms. Guion’s life: professionalism, participation, preparation and presentation.

GMMB’s Brad Perseke received the National Excellence in Leadership award, given in recognition of his steadfast support of Washington Media Scholars Foundation since its founding in 2009.  This award recognizes an exemplary individual who endeavors to support students and scholarship by partnering with the Foundation, and making a significant impact in the success of our programs and our students.

The final round of presentations took place Thursday, June 9th, and were scored by judges representing major media companies including the National Association of Broadcasters, NBCUniversal, Roku, TEGNA, and GMMB.

Many thanks to all of the talented finalists that participated in this year’s competition.  We also thank everyone who made the 2021 Media Plan Case Competition possible—from our sponsors to students, to professors and volunteers.

Take a spin around the District with WMSF Ambassador ‘Ticket’ Gaines as he introduces the 6 Media Scholars Finalist Teams who scored a trip to DC next week to compete for more than $25,000 in scholarships! Learn more about the Finalists and the 2022 Media Plan Case Competition here. 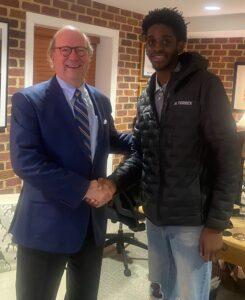 The Washington Media Scholars Foundation announced today the signing of Davonte “Ticket” Gaines, a Junior at George Mason University, and a member of the men’s basketball team. Ticket will serve as a brand ambassador to raise awareness about the foundation and the upcoming annual public affairs competition among college students in Washington DC. Among other things, Ticket will be appearing in a series of online videos to announce the competition’s finalists and welcome them to Washington DC.

Founded in 2009 by Roberts, the non-partisan Washington Media Scholars Foundation (WMSF) has raised over $2.5 million in scholarships and support to fuel the scholastic ambitions and career aspirations of undergraduate students pursuing degrees in media and public policy.

Each academic year, the Foundation touches the lives of 400 undergraduate students through its signature programs, Media Scholars and Media Fellows. These programs offer a supportive learning platform that challenges them to think creatively and critically, while rewarding best-in-class candidates with merit scholarships ranging from $1,500 – $5,000. Funded and sustained through the generous investments and active participation of its sponsors and media partners, WMSF empowers students to fulfill their dreams of working in strategic media by providing real-world experiences and reducing financial barriers to their success.

“I’m excited and honored for this opportunity to promote the Washington Media Scholars Foundation. The foundation does incredible work in providing scholarships and helping college students from around the country connect with the most influential people in DC. I’m looking forward to do all I can to help share this wonderful story,” said Davonte “Ticket” Gaines.

Davonte “Ticket” Gaines is from Buffalo, NY and is a junior at George Mason University where he stars on the men’s basketball team.